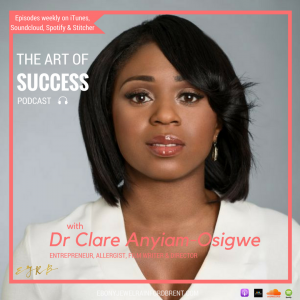 This week I sit down with Entrepreneur, Allergist, Film Writer and Director; Dr Clare Anita-Osigwe. Clare is the Founder or Premae Skincare , the world’s first 100% allergen-friendly beauty brand which has won 17 awards, she has been recognised by BET as a role model for women in business and more recently awarded the distinct honour of the British Empire Medal.

Clare’s journey is inspirational, from starting by mixing products from own kitchen, to building a company and brand, and more taking the step into  film, her first love with her directorial debut ‘No Shade’ – launching this year at the British Urban Film Festival. The film is a romantic drama which covers the issues of colourism and shadism from a British perspective.

Clare’s journey is a story or resilience and relentlessness towards her goals and vision which many will take inspiration from. In this episode you will learn: