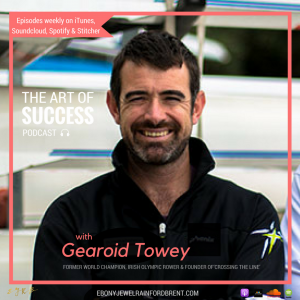 In today’s episode I sit down with Gearoid Towey, 4 time Olympian, Irish Rower and former World Rowing Champion to discuss his journey.

Gearoid is now director and founder of ‘Crossing the Line’ supporting elite athletes in transition.

In this episode Towey breaks down the key to a success mindset including how to win with a negative mindset. He also recounts his life changing moment when along with Ciaran Lewis he attempted to cross the Atlantic Ocean in 2005 in a 23 ft rowing boat. After 40 days at sea, having endured two tropical storms and a hurricane on the way, their boat was pitch poled by a 10 meter wave, leaving the men adrift 900 miles from land. They were rescued in the middle of a force 9 storm.